This is the layout on the ground. We may never know until that great day who will come forth out of any particular spot. But they are known to the Lord. And He wants us to find out. [I actually don't know if He wants us to find out now. But we are going to greet each other in the Resurrection and as I long for that day, I'd like to know where to greet everybody.]

This posting is still preliminary, but I wanted to share with others what we have so far to get other brains wrapped around the questions. Then hopefully, we can come up with some answers.This plot drew me back to the Springville Cemetery yesterday.

Some of my Dad's Cousins and I had a great trip down there Thursday afternoon. And the Assistant Sexton was very helpful. But my camera wasn't working and the cell phone pictures don't do justice to the importance of the questions (or my good-looking cousins either, "not a dud among them!" -attributed to George E. Vaughn). So I had to buy a new camera and take a couple of my own kids.

Let me explain the layout of plots in the Springville Cemetery. A relevant document will help:


A plot includes eight grave-sites. They are numbered, at least in this case, beginning in the southeast corner with No. 1. Then the numbering goes to the South and to the West with Nos. 2-5 swinging back in a circular orientation within the rectangle through Nos. 6-8. Hmm. The southeast corner is also where the cornerstones of Temples are laid to mark the beginning of the foundation.

The purchaser of this particular plot was Mary Kirkman who lies buried in Grave No. 3. Her headstone with the medallion of a Pioneer can be seen behind the "empty" grave. The stone says "Martin Handcart Company." You may have heard of her. She is the one who lost an infant and her husband at Martin's Cove [accounts vary, and it was most likely up near Bitter Cottonwood Creek on the Sweetwater]. They lit a fire in an attempt to thaw the ground then laid him in a shallow grave with their baby wrapped in his arms. Yes, that's her. She was sealed to Charles Hulet as a plural wife on 23 March 1857 along with our Ancestress, Eleanor Jenkins Vaughan. Eleanor (our Elinor) was also a widow from the handcarts having left her husband in the grave in Llanfoist, Wales. Elinor was more fortunate, perhaps, to have come in the first handcart company with Edmund Ellsworth. [A Hulet Family history I just read, recounts that Mary had lost her feet due to frostbite. She hobbled around the house for the rest of her life on wooden pegs made for her by a shoemaker.]

There are so may details of significance here. We still need to see if we can get a date for when the plot was purchased. But it certainly wasn't until after Mary Kirkman came in 1856. There was a least one grave already there, that of Hulet's wife, Margaret Ann Noah Hulet, who died in 1851. She is reported to be the first pioneer burial in Springville. We can only assume the cemetery grew out from that early grave.

The next burial in this plot is Charles Hulet himself in 1863.  We can also only assume that Margaret and Charles are actually there. Their burial ID numbers appear to be much higher and out of sequence indicating those graves, not with original headstones, may have been identified - or estimated (?) in more recent times. Yet it makes perfectly good sense that Mary, a plural wife of 1857, would respect Charles enough to place him next to the wife who joined the church with him and lived with him in Ohio, as well as Jackson & Clay Counties, Missouri; Nauvoo, Illinois; Mt. Pisgah, Iowa; and Springville, Utah.

The next burial by date of the markers is Hyrum Kirkman in 1867, a fifteen-year-old son of Mary and her first husband, Robert Kirkman. It may be at this point that Mary saw this plot as a family plot for her family. The other identified burials are all Kirkmans, including Mary herself. The broken headstone in the lower left of the picture, Grave No. 1, appears to  be Zillah H. Kerswell Kirkman, a three-year-old granddaughter of Mary. Grave No. 2 in 1890, appears to be a daughter-in-law, Josephine Crandall Kirkman. No. 4 is indicated as Matilda Ostler Kirkman, another daughter-in-law of Mary's. For the most part, the Kirkman graves appear to have been laid sequentially in order from right to left, the exception being Mary herself placed diagonally to Charles Hulet.

As we've already noted, there are two other plural wives of Hulet buried in the same cemetery. One of them is pretty close to the Kirkman plot. In fact, the headstone almost seems to be encroaching. It's the one in the upper right corner of the picture above, that of Cynthia Clyde. She purchased the plot next to the Kirkman plot. Her burial was in 1879 and the plot appears to be filled with her Clyde Family. So, that makes three wives of Charles Hulet with markers very close to his.

There is one more wife of Charles with a marker in the Springville Cemetery. This is Elizabeth Hough (Huff) Frampton, whose monument we have shown here. This is the one that is so interesting as it is an original monument of 1857. Please note that all the gravestones in the Kirkman plot are more modern, even if some of the later graves could be original. Those of Charles and Margaret clearly are not.

According to the cemetery records, Elizabeth is the only one buried in this plot, slightly out of line with the system that could have been imposed after this burial in 1857. And this plot was purchased by the Frampton/Smith family with the "Elizabeth" possibly not Elizabeth Huff Frampton, but a daughter or granddaughter, as one Frampton daughter did marry a Thomas Smith (possibly of the "T") and there are Smiths and Elizabeths throughout the family. It may have been intended as a Smith/Frampton plot, but the Smiths left to settle Heber City.

So now we have located four wives of Charles Hulet buried in Springville. His first wife, Ann Taylor Hulet, died very young and was buried in 1815 in Ohio. And the graves of four wives are accounted for in the Springville City Cemetery. Here is a map of the Old Section to indicate the four burials. The names are the purchasers of the plots. 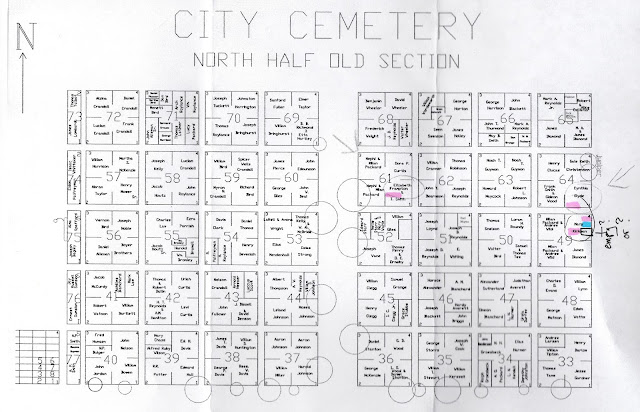 Only one wife's grave is not accounted for - Eleanor Jenkins Vaughan. As with any mystery in life, after checking all possible leads and gathering all known facts, we have to come back to the simplest explanation. Look at that picture at the top of this posting again. What do you think that explanation is?

Oh, I have an email message sent off to the DUP Museum in Springville. More later. . . .

I just spoke with a very nice sister from the DUP in Springville. She is a Great Granddaughter of Mary Lawson Kirkman and Charles Hulet. Her father lived with his grandparents Hulet for some time. It is her belief that neither Margaret Noah nor Charles Hulet are buried where those monuments are but that they are somewhere in that cemetery. She said that Mary bought that plot when her 15-year-old son died confirming my theory on that. She said that they will do some checking as will we, but she doesn't think the DUP has any information on Eleanor Jenkins Vaughan. She said Hulet was kind, generous, and had means to take care of people as he did the Kirkmans. Mary first came to his home as a housekeeper and he married her and took care of all her children. She said that he could have only been sealed to Eleanor and took care of her in some other residence as he had the means.

I still think that if Charles was as kind as he appears to have been, Mary would have made every attempt to have him buried near his deceased wife and herself buried near him too. It was the belief and practice in those days to be in close proximity to the person to whom you were sealed to rise in the resurrection. (I guess it still is among the Saints of the Latter-days). And I don't see why she wouldn't have been as charitable to Eleanor as well. She at least tolerated her well enough to be sealed on the same day to the same man. And Eleanor, just having walked across the plains and still alive, not likely having lost any body parts to frostbite as most in the Martin Company did, may very well have helped care for Mary in her recovery and perhaps the children as well in Hulet's home, or Bishop Johnson's of Springville, or wherever else they may have been before the sealing.

Someday, they will arise from their graves wherever they are. And we may even get to resolve this with them in the Spirit World before that Great and Glorious Day.

And we'll keep trying in the here and now.
Posted by Grant at 9:26 AM