A new clue popped up on FamilySearch.org from the Perpetual Emigration Fund Account Books:


Penciled note that John Lewis "went to California and died there" consistent with his death in 1867. It also indicates information from John E. Rees of Wales, Sanpete, Co., that a Daniel Thomas "had to pay the imigr[ation debt] to Bishop A[aron] Johnson of Springville, [Utah]."

Besides the wonderful confirmation that John Lewis went to California and died there [before 1878; we have him dead at 1867], there are some names linked to him.

Bishop Aaron Johnson of Springville is already known to us from Elinor's history. Looking up John E. Rees's information in FamilySearch.org and Welsh Mormon History doesn't give much except that he was a bishop in Wales, Sanpete Co., Utah. Daniel Thomas, appears to be Daniel Zorobabel Thomas who was on the Springville Census of 1860, FamilySearch No.KWJH-JYY.

He was from Wales and came to Utah in 1856, the same year as the Lewises and Mother Elinor. His first wife, Elizabeth, was born in Tredegar, and he, in Bedwellty, Monmouthshire. So it is likely the Lewises or Vaughans would have know them in Wales as well as Springville, Utah. A niece married the son of Mary Kirkham, plural wife of Charles Hulet.

According to a history on Ancestry.com, Daniel was a coal miner and present when Thomas Giles was injured and miraculously healed except for loss of sight. He was a humble man worn out from the coal mines who sang in the ward choirs of Springville and Salem. He had no known children. He died in Payson and was buried in Springville in 1880.

So far, there is nothing to indicate how or why he took on the obligation for John Lewis's PEF debt. 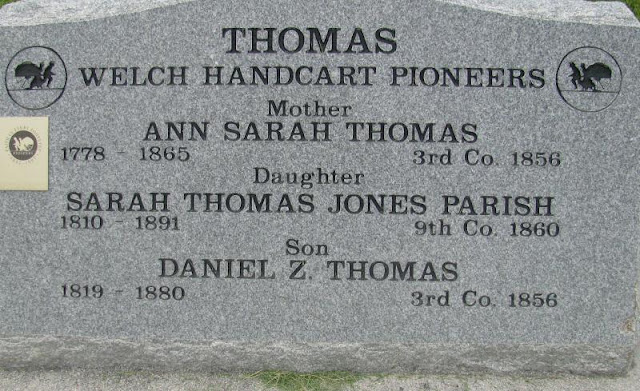 See here for updated info on this piece
Posted by Grant at 6:22 PM