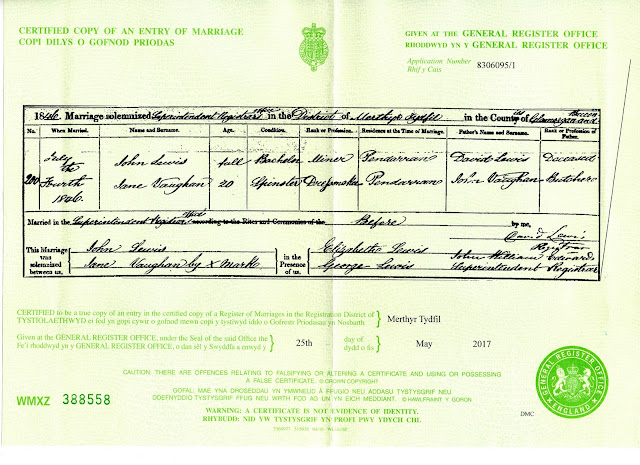 Now I have to go back and rewrite a couple of chapters!

But this is so cool!

First of all, everything fits. The two fathers of bride and groom are right and (1789) John Vaughan's profession is butcher in 1846! This predates (1825) John Vaughan's 1846 marriage to Maranah Watkins by two months so it's OK for Jane Lewis as a witness at her brother's wedding to be using her married name!

There are two surprises (maybe three). Jane's profession is listed as dressmaker. That requires some rewrites. And they were married in Merthyr Tydfil, the center of the Industrial Revolution in South Wales! And the marriage was solemnized in the Registrar's Office, which raises all kinds of questions. Why not a church? Were they already baptized in the LDS Church and just needed a record? Their residence is also listed as Pendarran ("Penydarren" in Welsh) which is an ancient part of Merthyr Tydfil back to Roman times. And where the first steam locomotive was invented and operated!