A Visit to the Vaughan Home in Cusop, Church Cottage

Skipping dinner was no sacrifice for me. I had a car hire for just a few days. There was no gap in the tour schedule, so I just took off when I could. We were already in Merthyr, so I just headed over the Beacons past Brecon and on to the Wye, up the backside of Hay, and into Cusop Village.

The Cusop History Group had already provided some good evidence of the location of Cusop Green and the only house there in the 1830s is the only house there now, Church Cottage, across from the lower corner of St. Mary's churchyard. This is very likely where John and Elinor Vaughan lived in the 1810s-1820s. Several of their children were likely born there. Possibly, that included John Vaughan (1825) in my direct line of fathers' fathers.

I knocked on the door and asked the woman answering if I could take some pictures from the outside. She was busy fixing a meal but said that would be alright. I started snapping away, then a man came out of the house holding a framed picture. He was most helpful in explaining what he knew of the history of the house over the past 150 years. He also explained what he was doing in restoration work. Much thanks to him!

The original house is the tallest part. There are now additions on both sides. The dormer windows are an extension of what may have been original low windows in the second level of the house. The house was originally two cottages apparently split with the side on the right a little bigger than the side on the left. The former door to the second, smaller cottage was on the side of the house. The outline of a former ground floor window of that smaller cottage can be seen in the stonework.

The stonework is original. The current owner has removed the white-painted cement covering that is common, and unfortunate, on these older, stone buildings. He explained that the stone and the mortar allowed the house to breathe. They are built on no foundation so the cement covering would cause dampness inside the house. His work is both aesthetically pleasing and environmentally sound.

The current owner sent me another photo by email that I hesitate to show because the lurid details may detract from the story but every piece of evidence helps. Church Cottage appeared in history in 1921 as a supposed victim of arsenic poisoning was disinterred from St. Mary's churchyard across the road and the coffin transported into the cottage for a time. This was the infamous "Dandelion Murder" with a solicitor hanged on the circumstantial case of using arsenic purchased from a chemist supposedly for dandelion control but more likely to slowly poison his wife. Truth is more amazing than fiction as this incident has inspired many murder mysteries involving misappropriated arsenic from the gardening supplies.

As the current owner pointed out, this old photograph shows the house cemented over, the dormer additions are already in place, but the door to the second cottage on the side of the house is still functional and apparently adequate for a coffin. Note the family in the adjoining cottage peering out their door at the disturbing sight.

When the 1921 British Census is released, we can probably identify the family peering out from next door. In the 1911 Census, there is only a John Pugh, a widower, age 67, living at Church Cottage. His occupation is listed as "general labourer." He may have been a grave digger in St. Mary's churchyard. It's hard to imagine him still doing that at age 77. There is an old shed across the road from Church Cottage that was used as a morgue for the Church. Most interestingly, his residence is listed as having three rooms indicating that it may be the smaller of the two cottages evident in the picture above. The other side appears to have the usual two-up, two-down.

The current owner also noted that the tenants in those days would have been farm labourers on the farm to the east, which I understand to be the matching "Church Farm."

Returning further to brighter things, I note that one can see Church Cottage from under the large yew tree outside the entrance to St. Mary's. 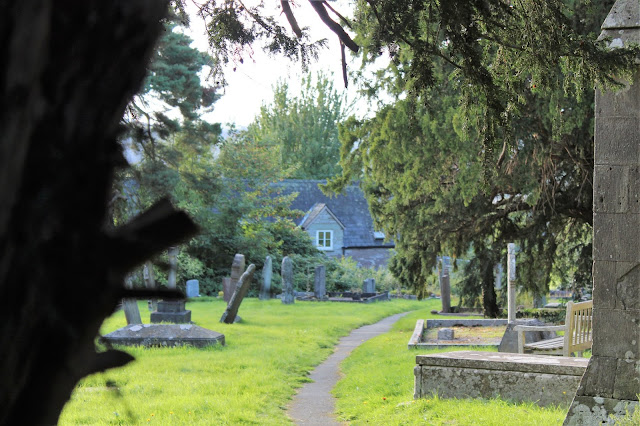 The Yew told me to return. Every time I do I learn something new. I will keep returning.

____________
This has been edited slightly pursuant to an email with corrections from the current owner. The blocked up stonework on the front of the smaller cottage is a former window. The door to the smaller cottage was on the side of the house where the policeman is standing to the left in the 1921 photo.
Posted by Grant at 9:58 AM