The Cost of Freedom - Our Nevada Cousin

The Carson Valley Historical Society will preserve the photos of the second generation of Vaughan descendants in Nevada as part of their collection of Ranch Families. Jane Vaughan's photo will go to the LDS Church History Library now that we have our scans as she was a handcart pioneer that no one knew about until Judy linked her up to Elinor in the Ellsworth Handcart Company of '56.

Before I send the pics, I want to have an accurate descendancy chart from Jane Vaughan Lewis Johns to send with them. I've been working down that tree and was so pleased last night to find someone working back up. It may be a relation by marriage, but somebody is doing Temple work in the Reno and Sacramento Temples. Yes! The right place for Western Nevada.

Then, just in time for the Fourth of July, I found a Cousin Hero. He survived the Bataan Death March and just before transport as a POW from the Philippines to Japan, he managed to have a letter delivered home to his mother, Edythe Jeanette Johns (McKinley Wagner), in Reno.

Wow! To have survived the Bataan Death March and then miraculously get a letter out during transport! And he knows the War is near over because the Japanese are evacuating the Philippines.

Then I turned the page: 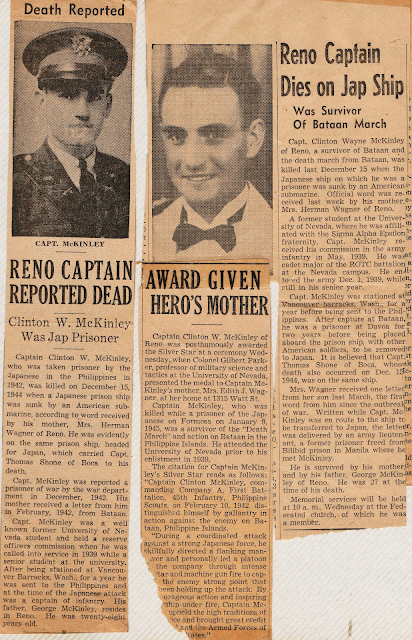 There are two conflicting dates and causes of death - shot by the Japanese or sunk in a POW transport ship hit by a torpedo from an American sub.

I'll check some more sources to see if I can clarify. But either way, hope back home was crushed with the news of death near the end of war.

Capt. McKinley has to wait for temple work as he's within the 110 year rule. But all his sources and documents are going onto FamilySearch.org today with the eternal date of July 4, 2015.
Posted by Grant at 11:03 AM