Well, I'd found it before but it sort of shocked me when it popped up on the bottom of the page I was crowd-sourcing for the National Library of Wales, Tithing Maps project. These pages can get very tedious especially going through multiple pages of the property of Viscount Hereford, i.e., Robert Devereux, 15th Viscount Hereford, who held the title from 1843-1855. And the funny thing is that William Vaughan is there sort of out of place in the middle of the Viscount's vast Tregoyd Estate which was farther up the road. ["Tregoyd," by the way, is bastardized English for "Tregoed" or "Woodtown/village/home." Never ask a dang Saxon to translate Cymraeg for you!]

This is kind of sad, too, because William, brother of Hannah/Joanna Vaughan 1763, was in this home likely from before 1832 when he shows up on a Voter Register living at Fir Tree Cottage in Freehold - which would have qualified him to be a voter. Some economic reversal made him a tenant of the Viscount in the same home by 1847. William shows up with the approximately correct ages in the Censuses of 1841 and 1851 on the same street of "Heolegare" [very bad Welsh! Should be Heol-y-gaer."] And he is a former butcher! 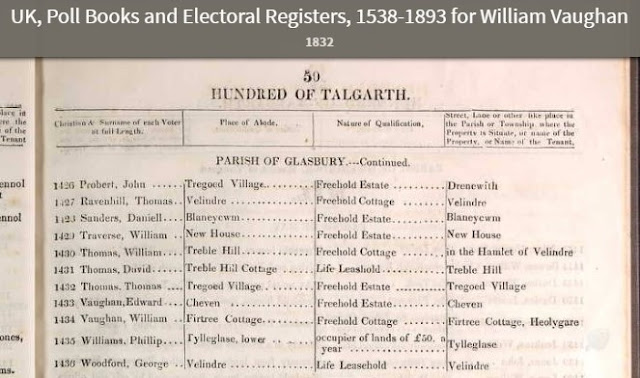 Being a Viscount, Hereford (AKA Robert Devereux) owned a lot of property in Herefordshire along with much of East-Central Wales up against the English Border. He was a Viscount after all. This connection with the Viscount brings me back to my suspicions that it could have been a Court Leet of the 13th Viscount Hereford that would have put Rees Price in gaol [jail] in Hay Castle for failure to pay his maintenance in bastardy for his son, our John Vaughan 1789.

I've looked at the online indices with the extensive files of the Viscounts of Hereford in the Natonal Archives of England in Kew. It would take some work to dig out what we need and I won't have time on this year's trip. Maybe it's time to engage another researcher.

We only have a few snapshots in time. I would like to see more extensive tenancy records and that Court Leet, if possible. (Of course the Vestries in Glasbury or Hay could have also sent him there as well, but no records have surfaced).

We keep on going as the plot constantly thickens.
Posted by Grant at 4:20 PM