We got in on part of the "official" British Expeditions tour of Cardiff once Professor Tom was in town. He's been going back to Wales pretty much every year since he was a missionary there (He's my age).

Here in front of Cardiff City Hall, we heard a full description of the Cardiff City Crest. First of all, the two red creatures on either side of the post are Wyverns, not Dragons. if I remember the rest of this correctly, the crest has a goat for the one that accompanies Wales at War (I can't remember why, though). The seahorse is for the Port of Cardiff that sent power to the world as the capital of coal transport. The Red Dragon is in the center holding aloft the flag of the Bute Family (pretty sure, or maybe Glamorgan). On the bottom left it says "Y DDRAIG GOCH" ("The Red Dragon"). And on the right is "DDYRY GYCHWIN" ("Will lead the way" referring back to the Red Dragon). The three white ostrich feathers on top are the "Ich Dien" crest that Edward the Black Prince (of Wales) won on the field at Crécy. Centered in the feathers is a Tudor rose with red Lancaster in center on white York. At the bottom on top of the scroll are leeks, because, Wales (look it up or watch Shakespeare's Henry V).

We finessed our way into Cardiff City Hall and saw the statuary of the Heroes of Wales. (This has also been a filming location for Doctor Who including some of the statues).

We ate pasties at the Cornish Bakery--the secret to good, inexpensive eating in Britain. A thick meat pie in a fold-over crust originating with the Cornish tin miners who could take it down the mines, eat out the inside, and throw away the parts of the crust that had gotten dirty.

And it was the finals for the Euro Football Cup that night and the street vendors were hawking all kinds of commemorative souvenirs. So, I got my full Welsh on.

My wife and I had pre-arranged plans to drive up to a play and to turn our hired car in at Cardiff Airport catching the bus back to town.

We headed back North to our ancestral lands and with time to spare, stopped at Crickhowel to visit the Castle ruin there in sight of the Blorenge once again.

As I follow a lot of social media from Wales, I had seen a notice some time back for Shakespeare at Tretower, Romeo and Juliet. And it was scheduled for when we were going to be there! I purchased tickets on-line and we made this one of many highlights of our trip.

The performance was by a traveling troupe, Taking Flight Theatre Company, which is really interesting because they are not just disabled-access friendly, but the company itself is made up of wonderful people with disabilities and incredible acting talent. Juliet was played by a young deaf woman. A chorus sang and signed most of her lines. A man in a motorized wheelchair played triple rolls as the fathers of both the Montague and Capulet Houses and the Priest. A deaf man played a wonderful pantomime of the Nurse. He was hilarious!

The main point here is that their acting was so good, their supposed disabilities faded away. And I will forever be haunted by the wails of Juliet upon the death of Romeo (spoilers!).

The other wonder was that it was performed outdoors with Tretower Court and Castle as the backdrops. For scene changes, the casual audience followed the players to different parts of the grounds. There was audience participation too as they invited us to dance at the party, Romeo himself dancing with my wife! Sadly, I had to go off to the loo at the end of the show (as per usual) and I missed the ticket drawing that my wife won! The prize was a kiss from the Nurse to great hilarity that I could hear all away around the corner of Tretower Court. Sadly, no pics.

The other advantage was to be at Tretower after hours. We were there early enough too that we could walk the lanes around the outskirts of Tretower Village and get some really great views of the Castle and the Court. Tretower has special meaning for us as an ancient seat of my family, the Vaughans.

The pics speak for themselves: 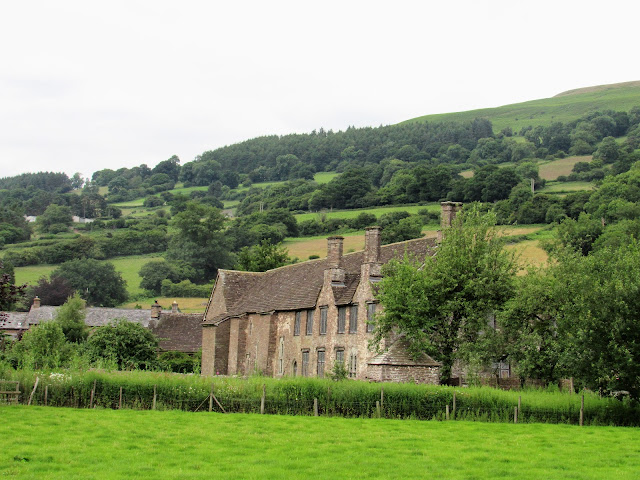 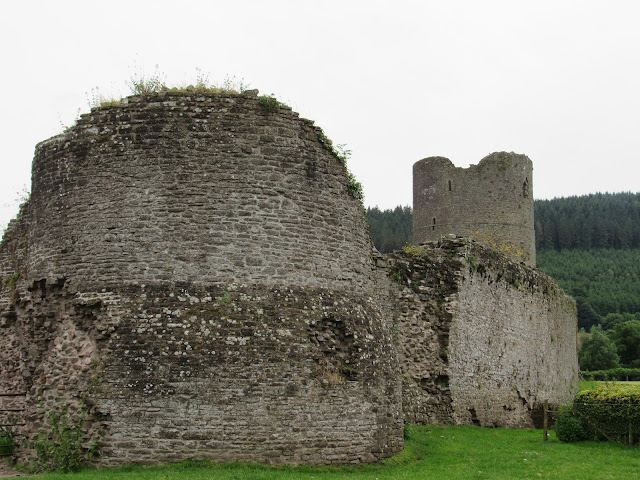 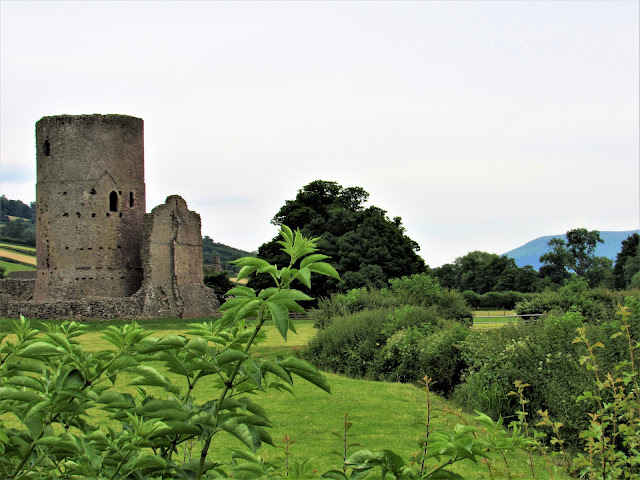 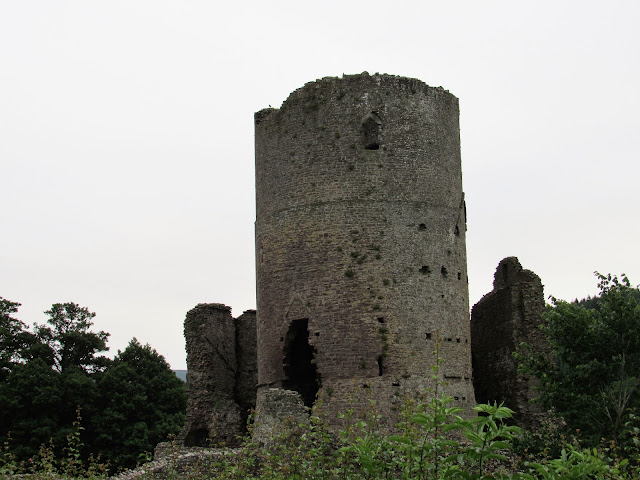 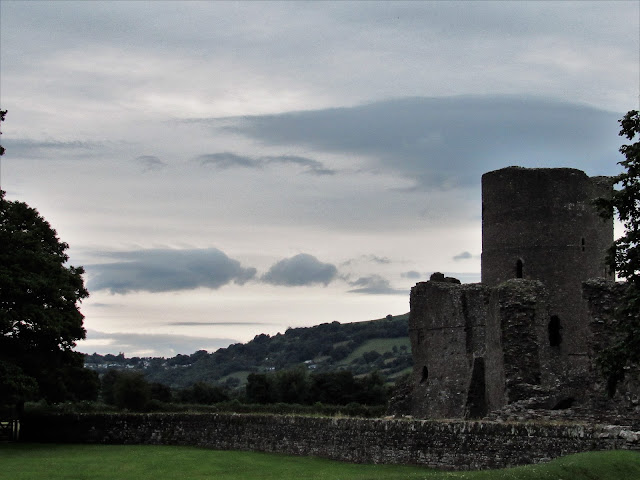 On the drive back in the dark, we turned on the radio to pick up the end of Wales losing to Portugal but with the praise of a grateful nation for getting that far. It seemed an oddly positive spirit for a loss.

We finally found the Cardiff Airport to drop off our car which is a loooong way out of town. We caught the last bus into the city centre but it dropped us off in an unfamiliar place so we wandered a bit to find our way back to familiar ground to lead us to BYU House. 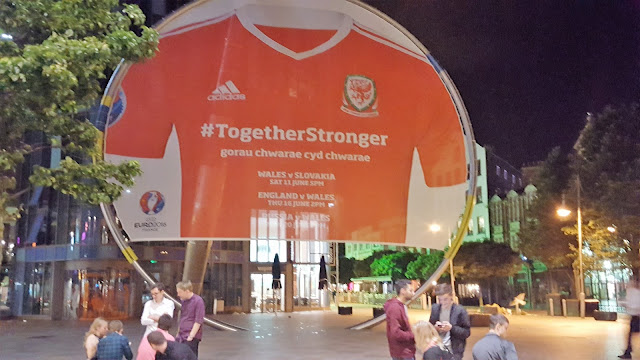 The crowds downtown were just leaving the pubs from watching the game. They were all in good spirits; some with quite a bit of spirits in them or it wouldn't be Wales. But they were well behaved, for the most part. We came across one group of young men and got a full mooning. It wasn't directed at us, they were just overly jocular with each other. We wanted to tell them that their behavior was not the least bit attractive if they were looking to connect up with some young women as their talk seemed to indicate. We thought it best to leave behinds behind.
_________________
Continue to the next adventure
Posted by Grant at 6:23 AM