Traveling the Seminoe Cutoff on the Overland Trail to South Pass

The Wyoming State Historical Preservation Office (WSHPO, pronounced "Wyoming Shipo") and historians with the LDS Church interpreting the Devil's Gate/Martin's Cove area on the Overland Trail in Wyoming, have established that it was Charles (1812-1865), not his brother Basil LeJeunesse (1814-1846), who was known as "Seminoe" and established the fort at Devil's Gate.

These brothers were amazing as most Mountain Men were. They all knew each other; Basil traveling with Kit Carson and John C. Fremont's mapping expeditions. Basil was killed by Modocs at Klamath Lake. Charles abandoned his post at Devil's Gate in 1855 due to troubles with the Cheyennes. Cheyennes killed Charles in 1865 at Clark's Fork, Yellowstone. His half-Shoshone sons took their vengence by killing Cheyenne Chief, High Backed Wolf.

Generally aware of the Handcart stories, I knew there was a ramshackle trading post at Devil's Gate that served as a shelter in the miserable winter of 1856-57 for those guarding the freight emptied from the wagons to carry some of the handcart pioneers of the Willie and Martin companies to Salt Lake City. In the past couple of years, I also became aware that the earlier and more successful handcart companies of that year took the Seminoe Cutoff. It was only two weeks ago that I managed to put the two together to understand it was this "Seminoe" guy who explored the cutoff that saved some trouble for my handcart ancestors and had established the fort/trading post at Devil's Gate.

Wyoming State and University of Wyoming archeologists studied the original site of Seminoe's Fort in 2001. The LDS Church built a reconstructed fort as it was in 1856-57 when my ancestor, Elinor Jenkins Vaughan (1789-1861) stopped there for the mid-day meal with the Ellsworth Handcart Co. on September 8, 1856:


The camp rolled out at 40 past 9 A.M. and travelled 14 miles. crossed sweet Water by a good bridge [at Independence Rock]. the roads were in many parts rather rough[.] had dinner [lunch] beside an old trading post close by the Devil's gate[.] camped beside Sweet Water at 30 past 5 P.M. not far from company of apostates. (Andrew Galloway, Secretary for the Ellworth Co.)

On September 11th, the Ellsworth Handcart Co. took "the left hand road" towards the Seminoe Cutoff. Seminoe's route left the Sweetwater for the high ground along the Continental Divide to South Pass. It was a bit short on water, but it avoided the last four crossings of the Sweetwater and the gruelling climb up Rocky Ridge. It generally saved a whole day as a true shortcut.


The camp rolled out at 40 past 7 A.M. and travelled 19 miles[.] the first part of the journey the roads pretty good[.] No Water for 12 miles[.] you will then come to a good stream of Water and good feed[.] take the left hand road[.] Travelled 8 miles to a creek[.] [This is probably the spring above Warm Springs just up from where the Seminoe Cutoff road currently meets Bison Basin Road] a poor camping ground[.] middling feed[.] camped at 6 P.M. about 11 P.M. Bro [McArthur's] Company came up[.] they had travelled nearly night and day to overtake us. (Galloway.)

travelled 18 miles roads very bad[.] a very Poor Camp ground[.] was woke out of my sleep about 11 o'clock by a loud Hurrah and shouting and the band struck up[.] got up to see what it was and it turned out to be Brother Mac Arthurs company[.] went to the camp to see the sister Hardys[.] staid up and did my baking (Ham.)

20 mi[.] but came 2 mi' out of our way mistaking out way taking the left hand road for a cut off but it was a cut on. Camped on a small creek on the Genuine Cut off 6 mi[.] from the turn off to the left[.] 10 oclosk at night Bro. Danl McArthur & co. came to camp with us the 1st time since leaving Florence Mo. (Oakley.)

The next day, the Ellsworth Co. continued on the Seminoe Cutoff to camp at what I believe is Upper Mormon Spring.


The camp rolled out at 45 past 7 A.M. and travelled 12 miles. the greatest part of the road very hilly & rough[.] a good spring of Water about 6 miles from where we started this moring[. Probably Immigrant Spring] camped at 45 past 1 P.M. good camping ground[.] feed pretty fair. plenty of spring Water about 200 yds from the road right side. (Galloway.)

Came 15 mi. on the cut off & camped by a good spring. to the left of us excellent feed[.] I whiped a man for stubbornly refusing to walk[.] this according to my  presidents orders[.] The man's name is Green (Oakley.) [Brother Green survived his trek experience and settled in Tooele, Utah as a miner and shoemaker.]

On the 13th of September, the Ellsworth and McArthur Companies crossed South Pass (see account of Mary Taylor Mayo's death). On the 14th, they met relief wagons from the Salt Lake Valley not far past their camp at Pacific Springs. This would have been along what is now Wyoming Highway 28 west of South Pass.

As a guide to the modern travelers wishing to traverse the Seminoe Cutoff, it is a wonderful adventure on a relatively unspoiled route. A four-wheel-drive vehicle is essential. We managed it in a Toyota Rav4 (although I would have preferred something maybe a little bigger.) The Oregon-California Trail Association (OCTA) has well-marked the eastern half with cement posts. There are also a few National Park Service (NPS) fiberglass posts. The western portion is marked as the "Seminoe Cutoff" where it meets the main Overland Trail just east of Twin Mounds.

However, the remainder of the western half is not marked at all by OCTA or NPS and the roads are very tricky.

I got lost up there three weeks ago exploring with a friend. This time, I carefully prepared pinpoints at every junction and spring of water on Google Maps based on Bureau of Land Management (BLM) maps of the route. My 12-year-old Grandson was able to read those on my T-Mobile smartphone as he expertly guided me from point to point.

I would never try this in the rain or snow. Be careful out there! 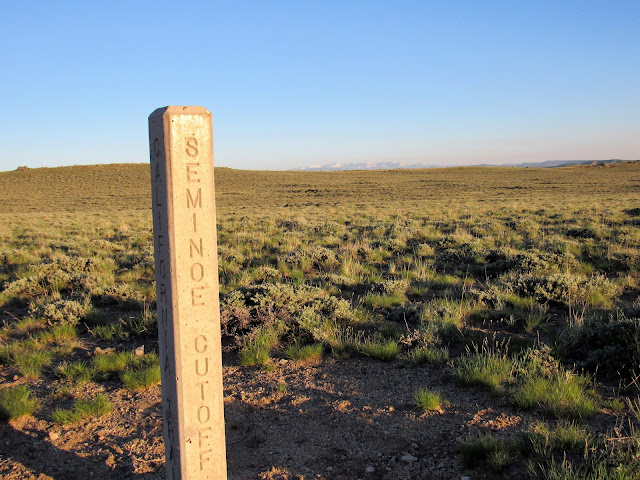