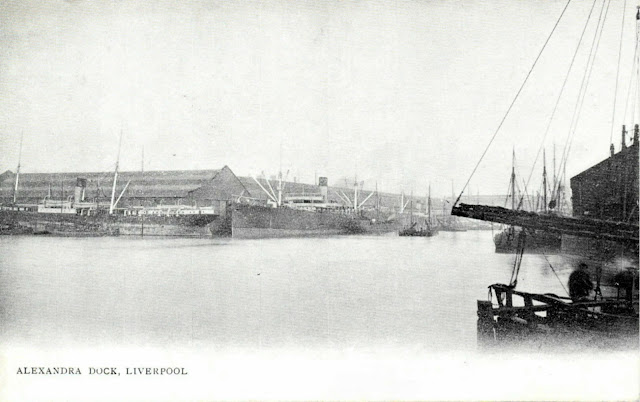 This undated postcard photo of the Alexandra Dock, Liverpool, is probably from the early 20th Century. The ships look like freighters with their derrick booms for loading cargo and no masts. The buildings around the docks appear to be old enough to have been there in the 1880s. Alexandra Dock was built in 1881.

Thomas Vaughan embarked from Alexandra Dock No. 3 in 1886. Isabella and the children embarked in 1887. Their dock is not mentioned, but the first-class passengers embarked from Prince's Landing Stage on transports to the Nevada, anchored in the Mersey River. Prince's Landing was just north of the Liver Building on the waterfront. I am still trying to determine if steerage passengers would have gone aboard earlier at the docks along with the cargo or if they were allowed to come on the small transport boats to the ship docked in the river. It is most likely that they were still loaded earlier at the dock as was the typical pattern for steerage.