Our handcart pioneer, Elinor Jenkins Vaughan (1789-abt.1858) could not have arrived in Utah at a more interesting and challenging time. We have solid evidence that she was here in that she was present for her own endowment on Temple Square on November 15, 1856, and that she was present on March 23, 1857 at the sealing to Charles Hulet in the First Presidency's Office where the tours for the Beehive House begin today. It appears from all that we know, particularly the sealing to Hulet, that she was in Springville, Utah from Fall of 1856 to the Spring of 1857. She likely died and was buried not long after Spring 1857 without it being recorded as those were busy times for Springville and all of Utah Territory. Many of the able-bodied men left by Fall of 1857 to defend against Johnston's Army sent by President Buchanan to put down a supposed Mormon Rebellion.

There was no rebellion. There was plenty of misunderstanding. And there was an attempt by LDS Church leaders to reform the Saints to prepare and sanctify themselves for the anticipated Second Coming of the Lord Jesus Christ. As of the present, neither the necessary sanctification nor the Second Coming has occurred. We still have work to do. And some terrible things happened in 1857 to throw us off from being a Zion People. Yet, sanctification still remains an option, as does entering the presence of the Lord which we hope and pray for Elinor as she did all that was required of her. May we do the same. 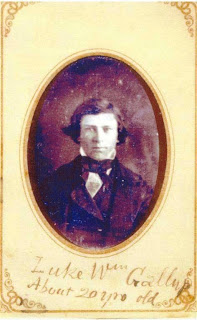 To explain some of the historical, spiritual, and all too human tragic context of those times, I choose the amazing journal of an ordinary person, Luke Gallup (1822-1891) who joined the LDS Church in Council Bluffs, Iowa. He pioneered Springville, Utah, served missions, and in 1888 moved to Orange County, California, where he died away from the Church leaving numerous, faithful Mormon descendants.

Gallup's journal covers the broad expanse of his life. You can find it on-line from the Church History Library. He had some writing skills and served as a clerk to bishop Aaron Johnson of Springville. What fascinates me is his account of the Mormon Reformation right at the time and place of Elinor's arrival:

Questions to be asked the LATTER DAY SAINTS

Have you committed murder by shedding innocent blood, or consenting thereto?

Have you betrayed your brethren & sisters in anything?

Have you taken and made use of property not your own without the consent of the owner?

Have you cut hay where you had no right to, or turned your animals into another persons grass or field, without his knowledge and consent?

Have you lied about or maliciously misrepresented any person or thing?

Have you borrowed anything that you have not returned or paid for?

Have you borne false witness against your neighbor?

Have you taken the name of the Diety in vain?

Have you coveted anything not your own?

Have you been inebriated with strong drink?

Have you found lost property & not returned it to the owner or used all diligence to do so?

Have you branded an animal that you did not know to be your own?

Have you taken another’s horse or mule from the range and rode it without the owners consent?

Have you fulfilled your promises in paying your debts or run into debt without prospect of paying?

Have you taken water to irrigate with when it belonged to another person at the time you used it?

Do you teach your family the gospel of salvation?

Do you pay your tithing promptly?

Do you speak against your brethren or against any principle taught us in the Bible, Book of Mormon, Book of Doctrine and Covenants, Revelations given through Joseph Smith the prophet and the Presidency of the Church as now organized?

Do you pray in your family night and morning and attend to secret prayer?

Do you wash your body and have your family do so as often as health and cleanliness require or circumstances will permit?

Do you labor six days and rest or go to the house of worship on the Seventh?

Do you and your family attend Ward Meetings?

Do you preside over you household as a servant of God and is your family subject to you?

Have you labored diligently to earn faithfully the wages paid you by your employers?

Do you oppress the hireling in his wages?

Have you taken up and converted any stray animal to your own use or in any manner appropriated on to your benefit without accounting therfor to the proper authorities?

In answer to the above questions let all men and women confess to the person they have injured and make restitution or satisfaction. And when catechizing the people the Bishops, Teachers, Missionaries and other officers in the church are not at liberty to pry into sins that are between a person and his or her God but let such persons confess to the proper authority that the adversary may not have the opportunity to take advantage of human weakness and thereby destroy souls.

January 1857
New Years day some snow. 3rd Light rain & the snow settled three inches by eve the 4th. 7th I crossed Utah Lake to burn coal with Wm. Bromley and Richard Westwood.
We went nearly West course & found our camp place 2 ½ miles up into the cedars. From 6 to 8 loads of cedar wood leaves the grove where we were daily. We cut wood & made one pit & burned it. Returned on the 20th. 22nd, 23rd 24th Did some writing for L.N. Scovil & again 28th, 29th & 30th on consecration schedules. 31st Attended meeting on Bp. Johnson’s strawpile. Elder O. Hyde preached. Next day he preached again same place & was assisted by Br. Carter of Provo. Day was fine.

The list of questions above do not seem at all odd or extreme. While we would word some of it differently today, particularly with regard to family relationships, and we might not address as many concerns relating to a frontier agrarian society, the principles all seem familiar. What is striking is the practical sense of the questions combined with the spiritual. Framed around the everyday labors of Luke Gallup, we see that it was a community of hard-working, would-be Saints.

The Reformation also included rebaptism. In the early days of the Church rebaptism was not unusual. It was used for repentance of sins,self-dedication at the founding of a new settlement or in a revival, and because recording-keeping was so poor church-wide in those days! (It didn't help that they kept moving around ahead of the mobs and armies.) On the records, it took us 170 some years to find Elinor's baptism recorded in Elder Needham's journal!

The November reference to sending wagons of relief was for the Martin & Willie Handcart companies. November 30 was a little late to set out from Springville as the companies came in to Salt Lake City on that day. So the Springville relief wagons were just in time to return with many of the survivors who had suffered greatly, many with extremities cut off due to complications of frostbite and frozen flesh. One of those was Mary Lawson Kirkman, who lost most of both feet as a survivor of the Martin Company. She was sealed to Charles Hulet at the same time as Elinor who arrived in the earlier Ellsworth Handcart Company of 1856. Springville histories also report of handcart pioneers from the earlier companies arriving in Springville. There were no rolls taken, but Bishop Johnson's house was overflowing with the pioneer injured and poor that winter of '56-'57.

According to Kirkman Family Histories, Charles Hulet took Mary into his home as a housekeeper then decided to marry her. To bring her in as a housekeeper without any feet seems more like an act of charity rather than a sound employment decision. The same may apply to the widow Eleanor Jenkins Vaughan. We will continue with Luke Gallup's journal in the next installment that may help us understand why plural marriage occurred in this manner.

Springville has some interesting things to teach about that, too.