It rained and I didn't care. There was more to see and do, especially the Good Friday "fireside" at the Merthyr Stake Center. Until that evening, I was off schedule with much to do.

Starting at the Valley of the Rhiangoll, or Cwmdu, just above Tretower, I needed to stop and photograph the standing stone. There is one in the middle of that valley that I could never see because it forms part of a hedgerow and is covered in greenery during the summer. I thought I had seen it as I drove by on the narrow highway up that valley. At Tretower they told me I should just stop at a farm gate and walk along the highway to take photos.

It actually worked. Even on that narrow highway, the fast drivers slow down for pedestrians. There isn't much shoulder to walk on, less to park on, but I did find a farm gate and parked only halfway in a ditch. And I got it!

Rhosier Hen, the farther of Rhosier Fychan (Roger Vaughan) of Bredwardine, came from his family lands near Cwmdu in the 14th Century. That means his people originated in this area. Many waves of Celtic and pre-Celtic people have been through here since the ancient ones put up the stones, but is there the chance that the new people mingled with descendants of the stone people?

If I had found a farmer, I would have asked to walk the field to touch it. I think there's a connection. My bones spring from the mud and the stones in these valleys.

Oh, it was muddy that day. But pleasant as I sat under the Yew and read aloud the Easter poems and others to my distant cousin, Henry Vaughan.

There was a Vaughan walk nearby in honor of Cousin Henry.

But I couldn't find it at the crossing of the Usk. I drove on towards the village of Talybont and found it on the Canal path! 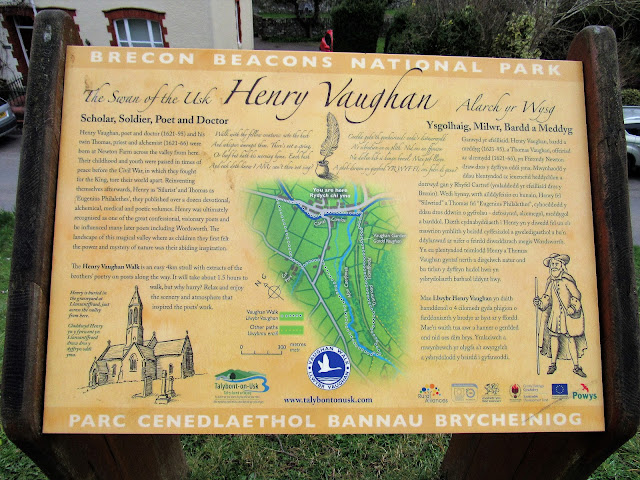 And on the canal at Talybont is the most amazing drawbridge which I hope to see in action some day. 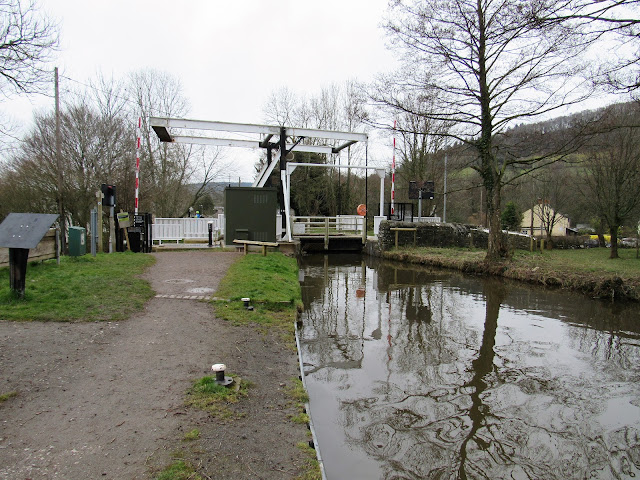 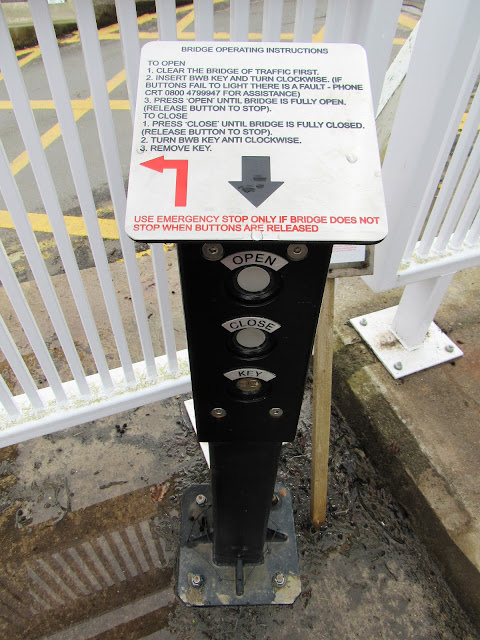 A guy in a canoe told me that if you have a boat that is licensed for the canal, then you get a key that will allow you to raise the bridge. But you can't do it during the hour before and after school when in session. I want to push that button!

There was still another churchyard that I needed to visit. It was just down the Usk and past Abergavenny. As I climbed the narrow farm roads towards Tregare (Tregaer) the view of Raglan Castle off to my right surprised me!

Tregare has a nice little church and a graveyard full of Morgans that need to be checked out.

As I was past Raglan, close to White Castle, I said to myself, "Hey! There are two more castles around White Castle that I haven't seen!" Known as the Three Castles, and built in the early days of the Norman attempts to pacify Wales (late 11th Century), I was closest to Skenfrith and headed that way guided by the Google lady. It was worth it!

The coolest part of Skenfrith was this little doorway down below the wall. What was out there? 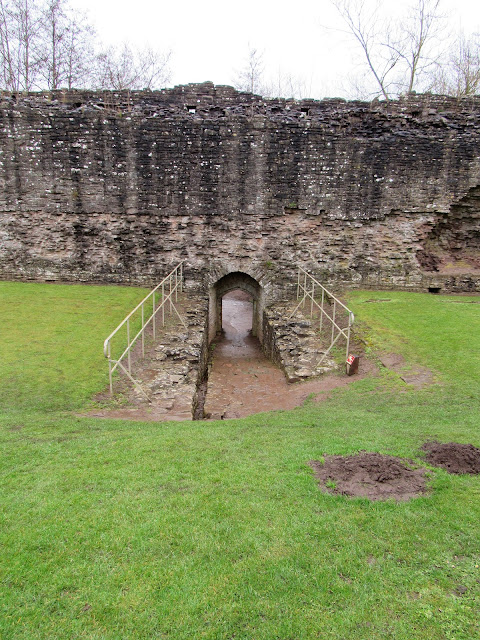 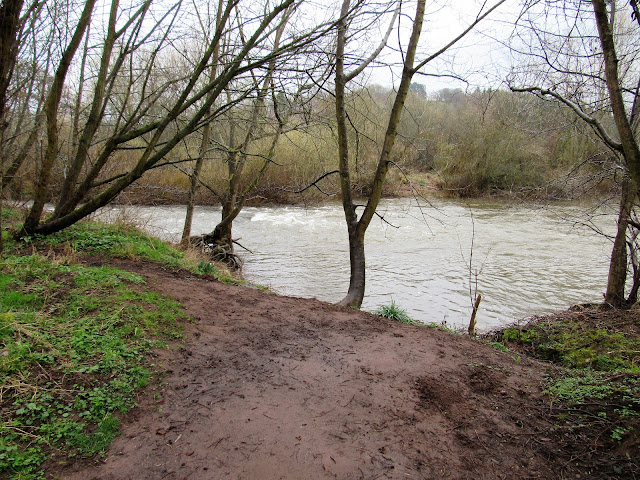 A river! "Whoa!" I said to myself, "That must be the Monnow!" Knowing that I was somewhat north of Monmouth and didn't know of any other big rivers coming out of the Black Mountains. And myself checked and told me I was right! (I'd been in Wales alone for a while now.)

What continues to amaze is the rural, seemingly unspoiled nature of much of Wales. And when you are alone at a castle in the rain, you can make amazing discoveries as if you were the first one there.

Except you weren't because in the past many people, my people, were here. And in many capacities as yet unidentified. There were a few of the gentry, even royalty, on my lines and certainly some illegitimate peasants. Farmers, tailors, puddlers (iron workers), drovers, labourers, all combine to give the past and make me what I am.

And I still had one more castle in the rain to go.

Just a little tip. Skenfrith has great and easy parking. Grosmont is strangely hard to find and there's very little parking in a tiny village. As the sign says up at "Castle Prospect," "Enter the Castle across from the store." OK. And on a rainy day, it's not hard to park on the street.

This is supposed to be the open lands south of the Black Mountains. These small, border castles between the Black Mountains and the larger fortifications and settlements at Chepstow on the lower Wye and Newport on the Usk, helped keep the Welsh in check. But they were never fully conquered.

The Welsh are still here and the castles are in ruins. 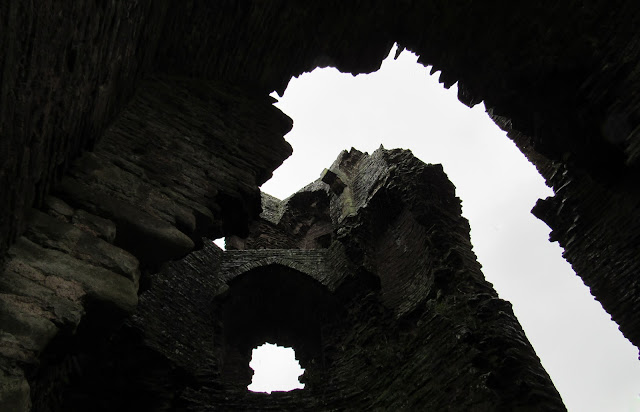 I hastened north and a little west to Merthyr Tydfil for the Good Friday music program. Knowing I would be wet and muddy, I had a change of clothes and shoes. I forgot socks so I had purchased some at Waitrose in Llanfoist on the way down from Talybont. Arriving in Merthyr, I stopped at the fancy strip mall just above the LDS Chapel. I even went into a drug store to buy some wet wipes to clear the mud from my toes. The windows in my Fiat 500 were fogged up enough I could change even if a bit cramped.

The Merthyr chapel was near full. They handed out a song sheet with some in Cymraeg that I expected we were all going to sing. In changing my clothes I had left my reading glasses in the car so I rain out in the rain to get them.

The Stake President opened the meeting in Cymraeg. It was such a shock and I got most of it. He then restated in English. We sang. We had tears. The mixed-culture choir from the Cardiff Stake, with some songs in Cymraeg, was great! (As Leanne Wood, Plaid Cymru Party Leader says, anyone can be Welsh if you want to be.) And the Dowlais Mens Choir was fantastic!

Among many others, they sang this song: